Bob Howard had a "right of first refusal" on the sale of WPGC. When the Richmonds tried to sell it to the Marriotts, he exercised it. Got a bundle. He used the money to buy WYSL and WPHD here in Buffalo in Oct '74. He asked me to moved up here and work for him. Bob sold the stations in '89 - walked with 4.3mil...he passed away 7 years ago (1993).

Photos
To see enlargements of any of the below, right click on any image then select 'View Image'.

Print Ads
Click on the images below to see enlargements.


Sweepers
The Riddler with the Missing 'W' Legal ID - August 1967 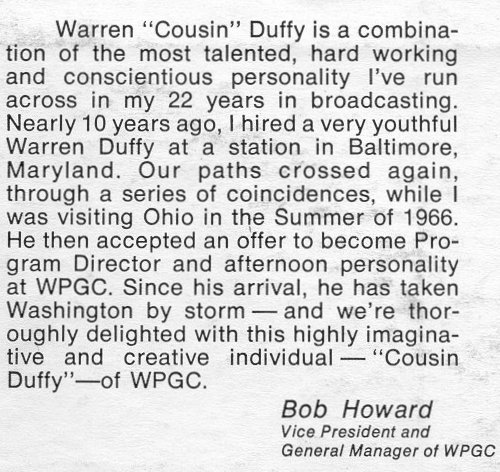 E-Mail Us Your COMMENTS.

Go to TOP of page.